Considering my stance that having a mental illness does not mean the sufferer is possessed by demons, I thought providing some support for my belief would be helpful. 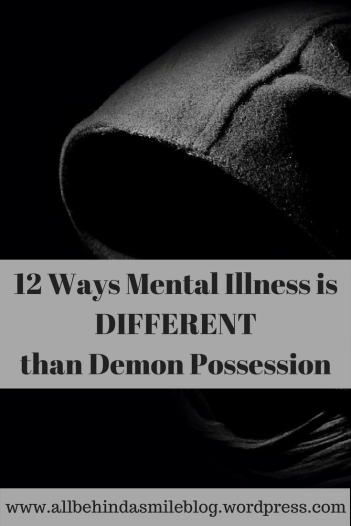 While I only included the relevant parts of these verses, I highly recommend reading the background of the section for context.

HERE ARE SOME TRAITS OF DEMON POSSESSION:

(as based in Scripture)

HERE ARE SOME TRAITS OF MENTAL ILLNESS:

(based on Scripture, some scientific knowledge, and also personal experience both with myself and others I know/have known who suffer with a mental illness)

A LITTLE MORE ON DEMONS (OR LACK THEREOF) …

It is also noteworthy that seizures are easily explained (for the most part) scientifically today – most people do not connect seizures and possession by demons at all. If you read Scriptures, though, there are cases in which seizures were caused by demonic possession:

Furthermore, this post would not be complete without mention of cutting. Yes, cutting has been associated with possession by demons:

The Bible also specifically addresses cutting as something to avoid:

Cutting being addressed so specifically is important, because someone who is demon possessed would not be able to follow such a command. The demon within the person would be making the decisions. Would a demon even read the Bible? For the most part, demons wanted nothing to do with Jesus. Frequently when Jesus interacted with demons, we see them asking Him not to torment them:

Hopefully this (very long) post has addressed any questions or doubts you might have had previously. While I’m sure this is by no means an exhaustive list of differences between mental illness and possession by demons (or a listing of all possible Scripture references), maybe having it out ‘there’ will clear up some confusion.

This site uses Akismet to reduce spam. Learn how your comment data is processed.